visorcentral.com >> Stories >> Special Reports
Report from the Floor
Why doesn't Graffiti Pop Up?

I also asked Mr. Hawkins why the Graffiti area didnt pop up (a la the competition) as it was wasting screen real-estate. He mumbled some answer. Later, I went to him in person and he explained: 1. Too complex for Joe Average. They need some simple input area without the possibility of being confused. 2. Cost (Though he indicated this was not the primary concern) and 3. Some apps might have to be redesigned. I was not satisfied with these reasons. Hell, maybe in the future hell change his mind.

He was also asked about color screens. They are keeping mum on the subject but it was clear that something is in the works. I threw out "A year or two?" and he j 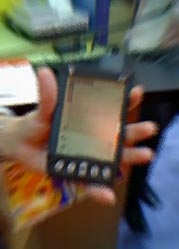 ust smiled and said that when it became feasible in terms of cost and power consumption they would be on the forefront (I paraphrase liberally here).

My take on the Visor: A perfect upgrade for those of us with older Palm devices or for others looking to buy their first PDA. The USB connection is great, but I think their tech support will be flooded with calls from people who do not have a USB connection and want the serial cradle. Well see.

And why have I not mentioned Springboard? I think it should be the last reason anyone should buy a Visor. When I got my Pilot 1000 I bought it because it could replace my paper organizer and sync with my computer. When I saw it in a magazine, I knew it was exactly what I was looking for and ordered it model unseen. That Pilot has stood me well these past three (four?) years. Ive upgraded the memory, repaired a crack screen or two (If I can sneak into Internet World I surely know a way to get a screen repaired for no charge) but the thing still does what I bought it for.

I am upgrading because it is time. I want a clearer screen and a backlight. Interesting note two: I tried to turn on the backlight of the Visor by holding the power button down and nothing happened. A rep told me that it was because I couldnt see the effect under the bright lights. Who knows. I also like the fact that The Visor is faster, both internally and through the USB connection, and I may find a way to use the 8 megs of memory.

However, the 8 megs are unnecessary for the essential functioning of the Visor as a planner. When all of the third party apps came out over the past years I thought to myself, wow, what a cool, added bonus to the best designed PDA. That is all it is. A bonus.

The problem with Springboards >>