Delimma: How does one wear a Visor on one's belt and look stylish at the same time?  The Slipper Visor by E&B Company answers this question by allowing the user to carry his or her Visor in an attractive leather case that adds next to nothing to the Visor's size.

The Slipper Visor makes all of the basic features of the Visor readily available.  There are cutouts for the Ir port and the microphone, as well as the HotSync port at the bottom of the Visor.  This feature sets the Slipper Visor apart from most of the other current cases on the market.  There is a plastic cover over the buttons, and the flap on the Slipper Visor folds back behind the Visor, allowing one to easily hold the Visor.  When not in use, the flap covers the Visor's screen and is secured by velcro.  The E&B logo is elegantly displayed on the flap.  The Slipper Visor comes in two versions: with and without a beltclip;  I reviewed the model with the beltclip. 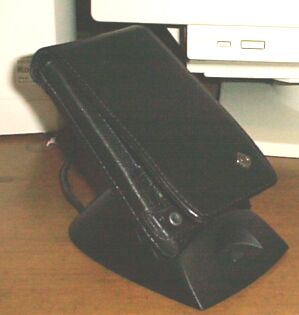 One of the most touted features of the Slipper Visor is that it allows you to HotSync your Visor while it is still in the case.  There is a small cutout on the back of the case that allows a solid connection to the cradle.  Sometimes it is not secure, and I had some trouble at first with getting the Visor to slide all the way in the cradle.  I found that I could get the Visor to sync without it clicking into place, but I had to be careful not to bump it and lose the connection.  The Slipper Visor also comes with a small "sticker" that makes it easier to click the Visor into the cradle.  This is something that will improve with practice, as the leather will eventually snugly fit the Visor and make insertion into the cradle easier.  Although it is tricky at first, the ability to HotSync in the case more than makes up for the learning curve. An added bonus of the Slipper Visor is that it works perfectly with the Think Outside Stowaway keyboard.

If there is one thing that I wish was a little different in the Slipper Visor, it would be the use of velcro to hold the flap in place.  In the picture with the Visor in the cradle, you can barely make out one of the velcro strips above the on/off button.  These strips are not long enough when you first get the Slipper Visor becuase the leather has not conformed around the corners yet.  This also causes issues if you use the PDA Panache custom stylus, which works, but there is a greater chance of the velcro not holding the flap from the Slipper Visor.  As I mentioned, once the leather wears in it should conform properly.

Another thing that you will either like or dislike is the plastic covering that is over the application buttons.  Several cases have this type of design, and it is up to your personal tastes whether you will like the covering or not.  I personally don't have a problem with the covering, but users who play a lot of games may not like it.